Determine the rotational inertia of a bowling ball using 2 different and independent methods.

College-Prep Physics: Today I tried an idea from Andrew Morrison (blog, Twitter), which appeared in the November issue of The Physics Teacher: Single Sentence Labs. Andrew writes, “a truly authentic scientific experiment does not come with any instructions.”

So as an introduction to our unit on acceleration, students were given this single-sentence lab: Does a spring rolling down an inclined lab table speed up? Justify your claim with evidence and reasoning.

It was fantastic. Lots of discussion within and between groups about possible experimental designs and analysis.

Some students went the traditional stopwatch and meter stick route:

Others asked for motion detectors: 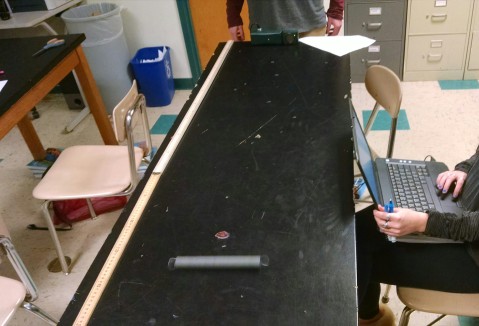 One group did video analysis:

NOTE: Last year, I did something similar, but used batteries instead of springs. Since the springs are hollow, they have a larger rotational inertia and accelerate more slowly than batteries. It takes about 5 seconds for the springs to travel the length of the 6 foot lab tables at a slight incline (about 3 volumes of Conceptual Physics texts high). I assume PVC pipe cut to pencil length would work well, too.

College-Prep Physics: We did an exploratory activity as an introduction to impulse. Another single-sentence lab:

LAB 13 — Marshmallow Puff Tube
Design several mini-experiments to determine the factors that affect the speed of the marshmallow.

Here’s the results from one group. 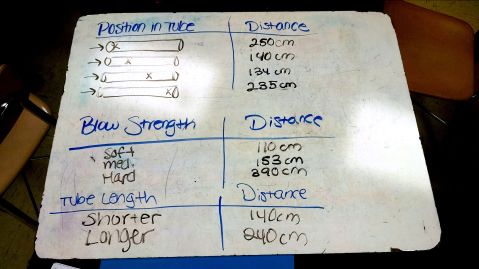 Sadly, no one thought to change the mass of the marshmallow: 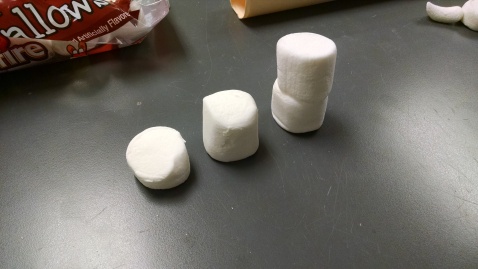 NGSS Science and Engineering Practices:
#3. Planning and carrying out investigations

College-Prep Physics: After Wednesday’s lab to introduce acceleration, I was ready to launch into the unit on constant acceleration. But then I read this modeling listserv email this morning before school:

Teach momentum early.  It allows you to leverage students’ naive conception of “impetus” – the notion that an object carries a force with it as it moves.  In many cases, they have conflated the concepts of force and momentum.

In our progression, we attempt to spiral key concepts in repeatedly.  We begin with constant velocity motion. In addition to the typical tumble buggy, there’s the motion of a hover puck and a glider on an air track to model.  It’s fairly natural to then look for the conditions when we find constant velocity – balanced forces.

In the free particle / balanced force unit, we look at forces as balanced /not balanced, and motion as CV / not CV.  We introduce system schemas, which depict the two-way nature of interactions, and introduce our students to the process of defining a system.  Hover puck and glider come out again as systems for analysis.

Next, we collide gliders on the air track to push the story line forward. We guide their focus to the change in velocity of each glider, and develop the model looking at the pattern of velocity changes observed in different collisions. Following momentum, it’s CA, and then unbalanced forces (CF) to develop N2 and get beyond “CV / not CV”.  Next quarter, we’ll look at forces in collisions, and develop N3 and the impulsive force model.

I like this approach not only because it leverages the student’s naive conceptions, but also because it spirals through core content repeatedly, pulling all of our mechanics work together in the end.

I tried teaching “momentum first” once before, but it was right after constant velocity, not after balanced forces like in the email above. That limited the amount of situations we could analyze, and there was some hand-waving about forces. But right now we are wrapping up balanced forces, so I think moving into momentum now will be more effective than it was previously. So my intended sequence for this year (slightly different than the email above) will now be:

So after we discussed the results from Wednesday’s speeding up lab, we looked at the forces during collisions. We used Plickers and a modified voting sequence from Preconceptions in Mechanics. Here are my slides:

Then we ended with the colliding carts demo to verify our predictions and models: