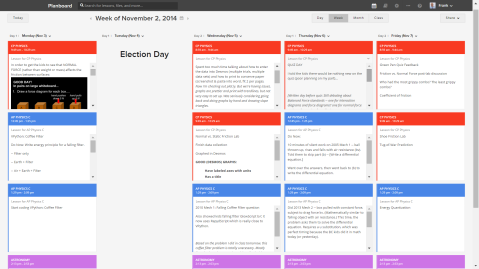 Today was a quiz day in College-Prep Physics. In AP, we looked at some old AP problems on drag forces, then introduced them to writing and solving differential equations. Nothing terribly photo worthy.

So I’ll share Planboard, an online lesson planning tool that I’ve found to be the best out there. It can handle our rotating schedule. You can set “off days” (holidays, snow days, etc). You can bump lessons ahead a day. You can copy/paste and drag/drop images into plans and then resize the image. Pasting a YouTube link automatically embeds the movie into the lesson plan. You can attach files to plans. There is no fixed template for each lesson plan — I love the fact that it’s free form — though you can make your own templates to use if you want. It has class, daily, weekly, and monthly view options. You can email lessons, export to PDF, or get an unlisted link to share lessons with others. You can add standards to lessons, too.

I’ve tried keeping paper lesson plan books in the past, but usually stopped after a month or so. Planboard has been the first lesson planner I’ve used for the entire year. I highly recommend it! 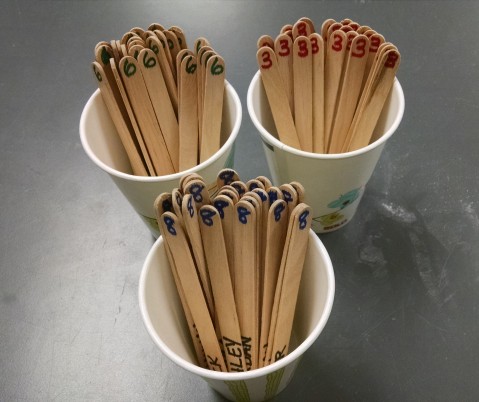 I’m really bad at calling on students at random. So today while students were taking a quiz, I wrote each of their names on Popsicle sticks. I wrote the period number on the other end of stick for easy identification.

The sticks will also come in handy for determining new random lab groups and seats. I change seats about every 2 weeks, but our SIS’s seating chart randomizer isn’t very random. 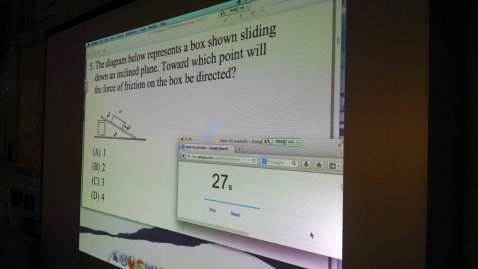 College-Prep Physics: We played a game to review for tomorrow’s quiz of friction. Each student got a mini-whiteboard and marker. I compiled a series of multiple choice questions from old Regents exams and projected them one question at a time. Students worked with their lab groups, though every student was required to respond to each question on their whiteboards. Each correct answer on the team earned the team 1 point. Teams did not have to come to an to an agreement on an answer — dissenters were allowed. Sometimes, for tricky questions, the dissenters were the only ones who earned points for their team.

Did you know Google has a built in timer? (You can see it counting down in the second photo.) Just search for “timer” and the time you want.

We originally had clickers with software that had Regents questions and a Jeopardy have built in. That was my original plan for today, but the software wasn’t installed on the computers after the upgrade this past summer. I actually like the whiteboards better. It wasn’t hard to keep score, plus there was no login time, etc. I also got to immediately see which kids got questions right/wrong in real time — something that’s difficult (if not impossible) with clickers.