College-Prep Physics: A wax photometer (two parafin blocks taped together with foil in between) is a neat little device which can show you the relative light intensity of two light sources. When the light intensity is equal on both sides of the photometer, the wax blocks are illuminated equally: 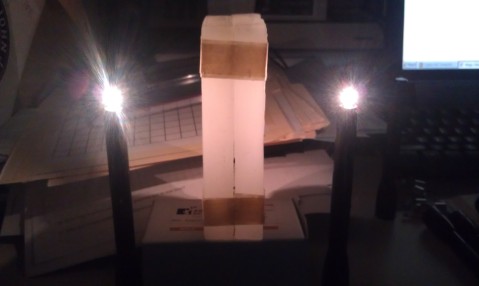 When one of the lights is moved twice as far away, the wax blocks are of unequal brightness:

What was amazing was that a student then asked, “Could we do this comparison with the sun?” … which is exactly what I had planned 🙂 . Groups of students took turns going outside and repeating the experiment with the wax phototometer and a 200 watt bulb in order to calculate how many 200 watt lightbulbs would be as bright as the sun (first picture).

Conceptual Physics: Students began drafting possible circuit designs to modify the bike light generator so that: 1) a battery lights the bulb when the rider is not pedaling and 2) that battery gets recharged while the rider is pedaling.

College-Prep Physics: Students designed a lab to determine the relationship between light intensity and distance. But first in the pre-lab, they made observations about moving the light, the square hole, and the grid paper. Then they had to invent a “light intensity factor” much like they had to invent the “cheesiness index” the other day. Finally, we agreed upon a common factor for us to all use in the lab: light intensity = # light bulbs / light area. This was similar to cheesiness = # bags of cheese / pizza area. The handout is here. The graph and analysis they had to do was identical to the math relationships we analyzed yesterday.

Conceptual Physics: Students used the bike generators and a diode to charge a rechargable NiCd battery. They pedaled for 20 minutes, stopping to take a battery voltage reading every 5 minutes.